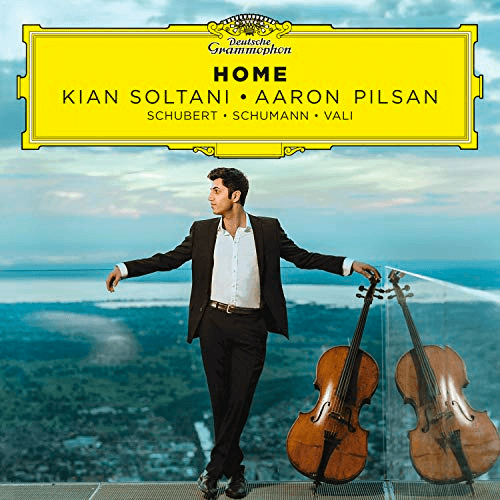 "A young cellist on his way to the top, but one who is finding his own way rather than following well-trodden paths" (Neue Zürcher Zeltung), Kian Soltani's debut album for DG, Home, is a homage to his Austrian and Persian roots. He presents works by his favorite composers, Schubert and Schumann, as well as the world premiere recording of Iranian composer Reza Vali's Persian Folk Songs, newly arranged for and dedicated to this young cellist.

Reza Vali was born in Iran, in Ghazvin (Qazvin in some systems of transliteration), a city which was actually the capital of the country from 1555 to 1598; a major centre of the textile trade, as well as a home to important traditional crafts such as calligraphy. Indeed, one of the most significant figures in the history of Persian calligraphy (an important art form in Iran) – Mir Emad Hassani (1554-1615) lived and worked in the city. In more recent times the important artist Shirin Neshat grew up in Qazvin, leaving Iran in 1975 and now based in New York. Qazvin is now a busy modern city, with its own airport and several shopping malls, as well as historic mosques. Vali lived in Qazvin until he moved to study at the Music Conservatory in Teheran. Further studies followed at the Academy of Music in Vienna and the University of Pittsburgh. Since 1985 he has taught at Carnegie Mellon University in Pittsburgh.

Vali’s work as a composer is indebted both to his Persian musical heritage and to the traditions of Western classical music. The result of the symbiotic relationship between these two traditions is a distinctive body of music. Vali’s earlier work seems largely to have been composed within Western frameworks, but at the beginning of the present century he began to use the Iranian dastgah/maqhâm system increasingly. These terms refer to the system of modal scales in Iranian music – roughly equivalent to the ragas of Indian music. In doing so, however, Vali has not abandoned Western conventions entirely: so, for example, Three Romantic Songs which open this CD is, in the words of the booklet note by Christian Kriegeskotte, a “homage … to Brahms and is a stylistic tribute to the iconic German composer”. Elsewhere on the disc, titles such as ‘Ashoob’, ‘Raak’ and ‘Ormavi’ suggest the use of a rather different tradition (I will say more of these titles later). These three brief ‘Romantic Songs’ (tracks 1-3) are very much in the Germanic tradition of the Lieder Ohne Werte; one might, I suppose, think here of the violinist taking the role of the vocalist and the piano that of the accompanist. The first two of the ‘Romantic Songs’ are identified simply as ‘Moderato’ and ‘Adagio – Molto allegro’. The third, by way of contrast has a different kind of title – being called ‘Tango Johannes’. Here, obviously enough, Vali has moved beyond stylistic ‘imitation’ (however ‘free’) of Brahms. The tango was, of course, unknown to Brahms and it seems unlikely that he would have been attracted to it if he had known it. It is hard to imagine his ‘exoticism’ going beyond Hungarian dances. There is, indeed, a degree of mischievous humour in Vali’s music (and title) here. Kriegeskotte tells the reader that the composer calls the piece a “limping tango” and suggests that we “imagine Brahms trying to dance the tango with Clara Schumann

We are immediately plunged into a very different world with the first (of two) versions of Âshoob included on the CD. In ordinary usage one meaning of the title-word is ‘crowded’, according to my Iranian wife. Technically speaking, Vali makes use in Âshoob of one of the common styles of Persian music called ‘Reng’ which is usually played fast (hence Vali’s tempo direction ‘molto allegro’) in 6/8 time and is most often associated with dancing. Already the simultaneous presence of an Iranian title and a Western tempo direction suggests that the composer is concerned with some sort of synthesis or reconciliation of the two traditions. This possibility is confirmed when one sees that the work is written for a string quartet (one of the most highly regarded kinds of ensemble in Western classical music) and the traditional Iranian instrument the santour – a kind of hammered dulcimer, played with two light wooden hammers. The best instruments have nine sets of quadruple bronze strings (providing the instrument’s lower register) and a further nine sets of quadruple steel strings (providing the higher register). The Carpe Diem Quartet, founded in 2005, is a particularly adventurous ensemble, playing as it does not only the classical repertoire from Haydn to Taneyev, but also composers such as Golijov and having collaborated at various times with a number of jazz musicians and figures like Yihan Chan (who plays the Chinese pipa) and Irish flautist Shannon Heaton. This Quartet is not remotely daunted by a piece composed along non-western lines. Indeed, they have made earlier recordings of Vali’s ‘Iranian’ music. 2015 saw the issue of a double CD-set by Albany records (TROY 1603/4) of part of what Vali calls his Book of Calligraphy, (perhaps chosen because of calligraphy’s important place in the artistic tradition of Vali’s birthplace) under which title he groups his chamber music compositions based on the Iranian musical system. Those 2015 CDs contained recordings of the first 12 pieces from Vali’s series of such compositions. Here the Quartet brings its skills and its experience with Vali’s music to the recording of Nos. 14 (Âshoob) and 15 (Raak). In this first version of Âshoob the interplay between the string quartet and the santour, played by Dariush Saghafi, results in some very beautiful and unique sonorities – unlike anything I have heard before. Only a little over six minutes long Âshoob speaks powerfully – such ‘unifying’ music written by an expatriate Iranian composer living and working in the USA inevitably has a resonance beyond the purely musical. I am reminded of Lewis Hyde’s concept of certain works of art as “gifts to the world” (Lewis Hyde, The Gift, 1999). Vali’s music is certainly such a gift.

‘Raak’ was composed for the quintessentially western ensemble of the string quartet, but it, too, is written within the Iranian musical system. ‘Raak’ is the name of a particular Iranian dastgâh. The name is surely derived, like the word raga used in Indian music theory, from a common Sanskrit source meaning ‘colour’ or, ‘the act of dyeing’. On YouTube there is a video of this same performance, with an introduction by the composer. As Reza Vali says on that video, the Carpe Diem Quartet execute the piece superbly, not least its abundance of quarter tones – it “swims in quarter tones” says Vali. It is an urgent piece of music, compelling and vivid, full of distinctive ‘colours’ (I use the word in the light of the etymology above). Anyone whose taste in string quartets embraces some of the works played by, say, the Kronos Quartet, should find this rewarding and not especially challenging. The work was commissioned by the Carpe Diem Quartet, who gave the premier at Carnegie Hall in January 2017.

The Carpe Diem Quartet, without Dariush Saghafi, play two further pieces on the album. There is the second version of Âshoob for string quartet alone (my wife tells me that another meaning of the title is as a word to describe something as being made of a mixture of too many things). If Vali had that meaning in mind when he initially wrote the piece for santour and strung quartet, he was surely being ironic. But he was generous enough to produce a second version for string quartet alone, for those who found the instrumental ‘mix’ of the first version too rich a mixture; my own preference is for the original version with santour. The other work is Ormavi, the title of which refers to Safialdin Ormavi (1216-1294), sometimes referred to as Safi al-Din al-Urmawi al-Baghdadi, who was a famous musician and theorist of music. For historical reasons his writings were in Arabic rather than Farsi, though he seems to have been born in Persia. Ormavi is in eight short movements – I believe that their titles are all the names of particular modes in Iranian traditional music – some of them certainly are and they are presumably ones discussed by Ormavi. All are interesting, my own favourite being the seventh, ‘Rooh’ (the title might be translated as ‘soul’ or ‘spirit), which is played pizzicato throughout (it is only just over one and a half minute long).

The four folksongs grouped under the title Love Drunk, for violin and piano, were commissioned by the violinist Thomas Jones, Australian-born but now living in the USA. The title should alert us to a particular strand of imagery central to the tradition of Classical Persian poetry – in which the experience of love, especially the ecstasy of love (whether of a human individual or of God) is seen as a form of intoxication. To quote just one line from the greatest of Persian poets Hafiz (c.1316-1389), as translated by Gertrude Bell (Poems from the Divan of Hafiz, 1897): “Wine-drunk, love-drunk, we inherited Paradise”. As is the case with most worthwhile poetry, images and symbols in this tradition have more than one meaning. The object of love may (without the text being specific or unambiguous) be either human or divine. The wine may be a good red from Shiraz or the ‘wine’ of the holy spirit. In the same way, though Vali tells us that in writing ‘Longing’ he had in mind the longing of a grieving lover for a deceased beloved, we might readily hear the music as the composer’s longing for a lost Iran. Vali describes ‘In Memory of a Lost Beloved’ as “a reflection upon the grief of separation” and tells us that in ‘The Girl from Shiraz’ “the sensual and the spiritual aspects of love intersect”. Vali says of the closing piece, ‘Love Drunk’ that it “describes the intoxicating joy felt when lovers meet”. We may choose to understand this lovely music in such terms or we may choose, since these ‘subjects’ are exemplars of archetypal emotional states, to hear in Love Drunk reflections of religious love or, indeed, of many other kinds of love. Vali universalises his subjects by, for example, alluding to ‘Silent Night’, Tristan and Isolde and the Quartet for the End of Time in ‘The Girl from Shiraz’. However one chooses to interpret them these are pieces with a considerable emotional impact.

Those at all adventurous in their listening should try this CD – no great courage is needed for the experiment. This is music which will give pleasure and provoke thought.